Somebody is misusing my servers for DDoS as described in DNSSEC Amplification Attack. Neither the protocol nor the implemetation offers any kind of protection. Both try hard to provide the highest possible (attack) performance. I'll try to defend my systems anyway.

DNS amplification attacks are a well known problem. The attacker sends UDP queries with spoofed adresses to the DNS server. And the server responds with much larger responses to the vicitim. Many hundered Mbps may be generated with ease.

Server operators are helpless. They have only a few options:

All those solutions did not convince me.

In order to understand the problem better, please have a look at real world data. As first approach the interface of the server is switched to 100Mbps and becomes quickly saturated by eight Mbps of attack bandwith. The amplification effect is impressive. Oviously this is not a usable solution. 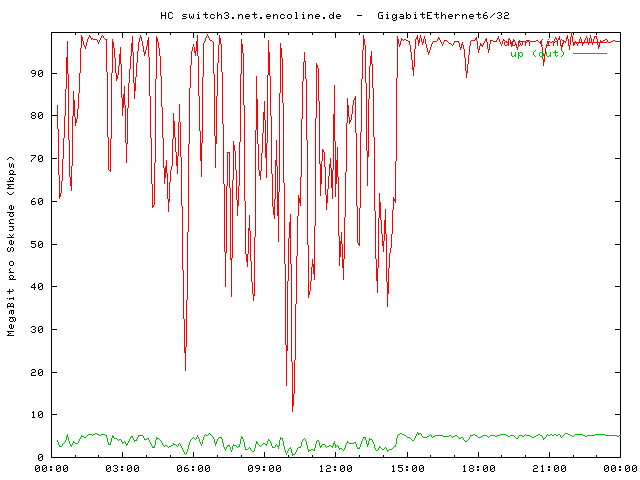 Next try reducing the size of the responses using REFUSED. Bandwith drops instantaneously after switching the software. However the vicitims keep complaining. In this mode this server is able to saturate a typical 2Mbps business line. On the other hand queries other than ANY can be observed, which exploit similar amplification effects. This is the path to the next arms race. 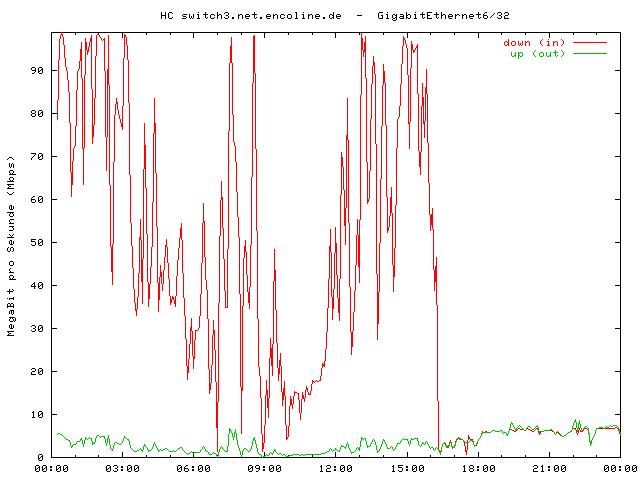 I'd like to have a self-learning system, which silently drops "bad" queries. It should provide auto-recovery, in order to be run without permanent supervision or manual adjustment. And it should not harm ordinary users.

I remembered BGP Route Dampening, which seems to match my requirements. Wrong defaults discredited this proposal. I was warned and promised to check all my assumptions with real wolrd data.

The basic idea is to collect penalty points per IP (or network) depending on the type of the query and the size of the response. Those penalty points should decay over time. Applying a hysteresis to the penalty will start dampening at a high level and stop at a muich lower value. During dampening no processing (besides calculating penalty points) should occur. In this state all packets should be dropped silently, even if packets are malformed.

Ciscos implementation tastes badly, because they require a regular scheduled full table scan to time out the values. I'd like to have an algorithm with constant or at least logarithmic timeing. Decaying table entries should be handled by the way.

The average case should be fast when accessing the data. And the typical case is dominated by attacks. Therefore the table entries should be searched in the order of probabiltiy.

My prefered data stucture is a heap. Using linear storage, the heap does not require explicit meta information. All the structure information is derivated from the numeric properties of the array indicies. The high penalty values are stored in the front of the heap, so linear searching the heap arrary will work fine in the avarage case.

Instead of aging each of the heap entries regularly, I try to recalculate only the current and the first element. In order to delay the calculation, each entry requires a last access time field. The current penalty is calculated using the old penalty value and the time difference. Recalculation is only needed after serveral seconds, not every time.

Stable software is designed around deterministic ressouce usage. That's why the heap should have a fixed size. To keep it small, all entries which drop below a certain limit should be removed as soon as possible. In the case of a full heap new entries can simply overwrite the last old one.

In order to age all entries, it should be sufficient to decay the first entry with the largest penalty. Over the time the decay will press it downtree. In theory this will cause the whole tree to be processed.

The very first try was a desaster: Software crashed in the first few seconds without any useful output. The reason was as simple as embarrassing: I forgot to allocate the heap. While fixit it, I wrapped most functions with asserts.

And the next try was really promising. 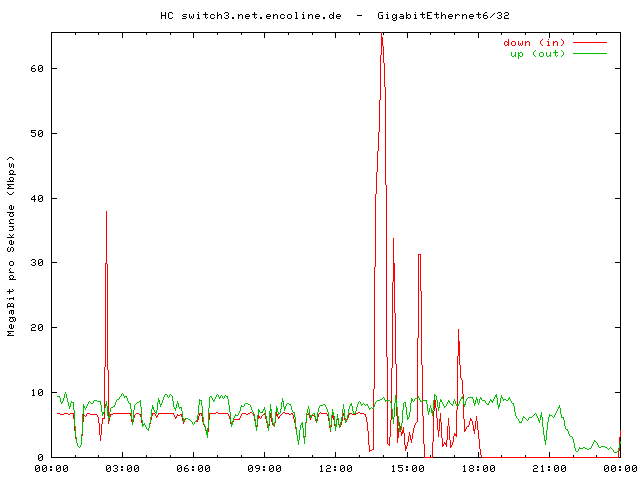 The old software (reponding with REFUSED) runs up to 02:00. While chaning the software, the output data rate drops naturally. The drastic increase is caused by the learning time, where all packets are processed. 19 seconds later, the first attacker was catched. Those are 40000 queries!

But a few minutes later the server crashed again:

This bug is located in the heap manipulation functions. I rewrote "heap_down" (thanks to Knuth, TAoCP) and removed 80% of the code.

Next try was delayed up to 13:30 and became a complete flop: Traffic increases without limit. The reason is, that the attackers IPs fight about the last entry in the heap. They override each other, so none of them gained enough points to be punished.

The simple solution is to not override the last entry, if it has a higher penalty. I log an error message, if the last entry has a large penalty values. In this case the table is fully booked with attacker IPs.

Those changes bring the system up. After a learning phase the output rate drops to two Mbps since 14:30. But about an hour later, most attacks come through again.

WTF? I do not see that many attackers in the parallel sniffing. I observe some occasional spikes with some new addresses. This bug hides somewhere else. My assumption, the table will be aged step by step, seems to be wrong. How? The most prominent entries do not stop attacking when I stop sending responses. They collect penalty points faster that the decay can remove.

Only logging the situation is a really bad idea. This GB of logs was unnecessary. If the table is full and the server stops with a fatal error, all I can to is to restart the server. That's why it's enough to log it once and clear the tables to allow a new learning phase.

In order to enable real aging, I recalculate three entries: The first, the last, and a random one. There is no need for perfect randomness, it is sufficient to hit the table at different points. Shortly after 17:00 the change is ready for deployment. But about an hour later the system crashes again!

There is no bug at this point. The system can't crash here. What happened?

The only possible explanation is, that the heap was modified while being processed. But bind runs as a single process, does it? No, it does not. Bind is multithreaded. Introducing a simple static counter at the API calls reveals the awful truth:

After rewriting the whole API code to insert a central LOCK about the heap code, the system is working for the first time! 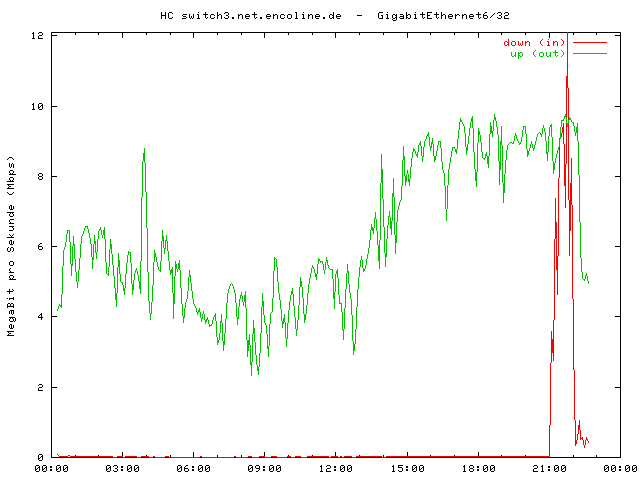 I dramatically shortened the learning period by applying a new penalty table:

Using this configuration attacks are detected within the first 40 packets. After two hours of running the situation consolidates to:

Out of 10000 queries only 30 are permitted and processed.

This patch exists only for historical purpose. Please refer to a more usable version.

If the patch allows runtime configuration, there will be a download button.

Publishing source code is the only way to let somebody find the most horrible bug. Did nobody else notice this copy and wast desaster? Data is destroyed, the heap is corrupted!

Let's take this straight: t=a; a=a; b=t; How should this ever work?

That's correct! And the bug is already fixed in the code above. Many thanks to the employee of Suse, who dropped me a note.

And finally an other braindead bug: Calculation of decay misses a minus in the exponent. The penalty is increased expotentially over time. The patch above is already fixed, but the history of this bug will be presented soon.

Could you please have your whole blog in English.We also would like to read